Jekyll Helper A GUI for Jekyll

Jekyll Helper is a program that serves as a basic GUI for Jekyll. It allows users to more easily test and build their websites by offering a GUI interface for serveral of Jekyll’s main functions. 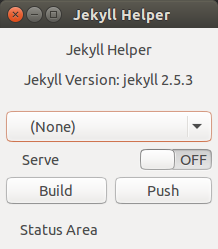 Jekyll Helper primarily supports Linux, however it may be able to run on other operating systems.

You could also download and install the program from the “.deb” file on the releases page on GitHub.

This program can be installed from the latest git through the Arch User Repository. It can be created from the AUR manually or through using an AUR client like Yaourt.

The command to install it with Yaourt is the following:

This program can be packaged and installed for Arch Linux via its source code by running the following commands.

If you are not using a Debian-based or Arch Linux-based Linux distro, then you should be able to compile Jekyll Helper from its source code which can be found in the program’s GitHub repository.